or
Already a member?
A verification email was sent to

Please check your email and click on the verification link to proceed.

Enter your email used in your BrickLink profile. A password reset link will be sent to your inbox.

We emailed a code to reset your password. Please enter that code:

If you haven't received the email, check your junk, spam, or other folders.

In Memory of Dan

After I die and go to heaven this is how I imagine it to be: A place where there is an infinite amount of bricks and infinite amount of time to build with them.  There would be all kinds of bricks for all the themes so that when I got bored with building a castle, I could move on to build a town or a pirate ship. There would also be lots and lots of other LEGO maniacs to share ideas and build with.

Dan Jezek was born June 25, 1977 in Prague, behind the Iron Curtain in what was then Communist Czechoslovakia. Dan was the son and only child of two accomplished parents: Jaroslav and Eliska Jezek (Jezkova). Jaroslav made a name for himself as a mathematical genius in his early twenties when he “solved the unsolvable”. Jaroslav came up with a mathematical proof to a theory that had remained an enigma for more than a century. In so doing he developed the early now-established proofs of what is today Universal Algebra. Immediately, the young mathematician won both notoriety and a chair at Charles University where he remained a resident scholar the rest of his life, until his death in February 2011. Dan’s mother Eliska was graduated from Charles University in Prague in 1979 with a doctorate of jurisprudence, a law degree.

In his capacity as a professor of mathematics, Jaroslav was well known throughout mathematical communities at university campuses around the globe. The Bolshevik government in Prague was willing to grant him and his wife and young son permission to travel abroad during summer breaks from Charles University to serve as visiting professor in western universities. Their travels took them to Germany, Canada, Berkeley in California, Vanderbilt in Nashville, Tenn., the University of South Carolina, and the University of Hawaii. 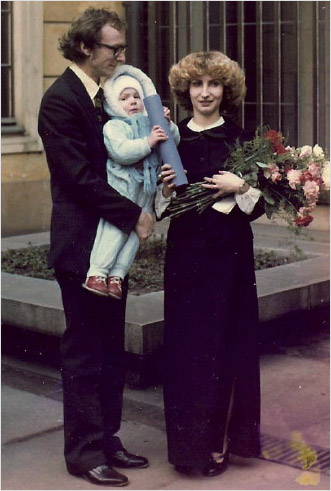 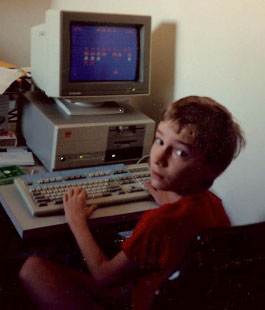 Dan working with his first computer at age 11. 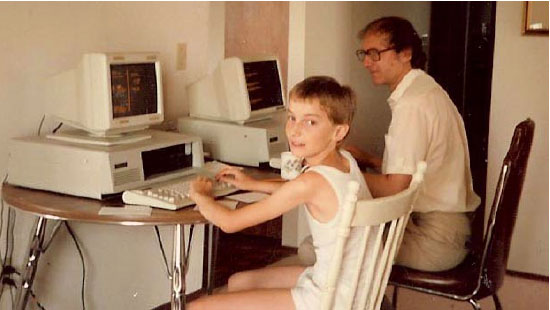 These temporary escapes from behind the Iron Curtain allowed the Jezeks access to some things unavailable in Czechoslovakia. Two things that played an important role with regard to young Dan Jezek were LEGO and computers. Although unable to afford items that were expensive by local Czechoslovak standards, the Jezeks spent what little hard currency they had for a few western-style “luxuries”. When Dan was only three, his father returned from a trip with a box of LEGO, a fire station set. It was Dan’s introduction to the “The Brick” and he took to it immediately even at that young age. He was always able to understand and build sets designed for children much older than he. Also, beyond his age was his interest and ability with computers. He was only nine years old when he began playing with his Dad’s relatively primitive yet otherwise locally unavailable “Leading Edge” personal computer. One of the first things Dan learned to do with a computer was program his own simple game, accomplished at age 12. From that point on a fondness for both computers and LEGO would drive Dan’s life.

Dan spent most of his childhood growing up in Prague. He was a good student, but sickly as a child. Later his mother would learn that environmental toxins in the area where they lived played a major role in keeping Dan sick to the point of occasional brief hospitalization while he was growing into his early adolescence. In summer the family would spend weekends in a nearby rural village. Brick by brick they built their own “country house” in the village and it remained an inviting refuge from less hospitable places in the city. The icon Dan used for the “MyBrickLink” square on the BL Homepage is a close replica, modeled after the country house where he spent so many happy days as a child. 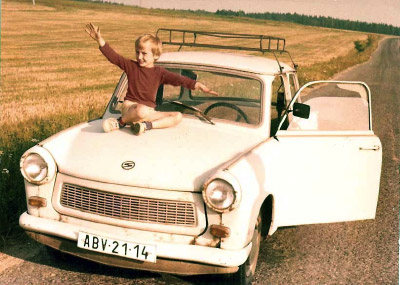 The family car was an aging Trabant, the Bolshevik one-size-fits-all 2 cylinder, two-stroke vehicle designed for the masses. He loved it anyway. 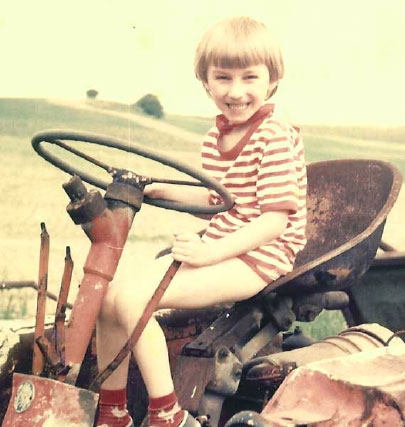 Dan spent his childhood summers at the “country house” in a rural area outside Prague.

When The Wall fell in 1989, Jaroslav was offered a professorship at University of Hawaii and the family moved to Oahu, arriving Christmas Eve, 1990. Although Jaroslav eventually returned to the new Czech Republic after several more summer professorships at UH, Eliska and son Dan stayed on. The weather and clean environment in Hawaii agreed with Dan and brought him back to health. His mother wanted to maintain that regional elixer and Dan grew to become a robust young man. He became proficient as a competitive weight lifter at a local gym near where they lived in Kailua. He won several trophies in local competitions and one of his first jobs was as a trainer in gyms on the windward side of Oahu. 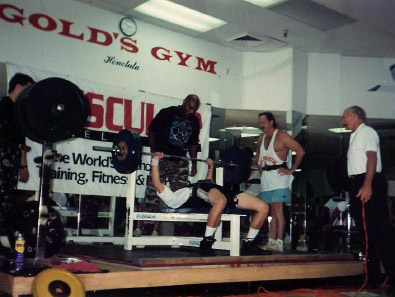 Dan power lifting during a competition in Kailua. 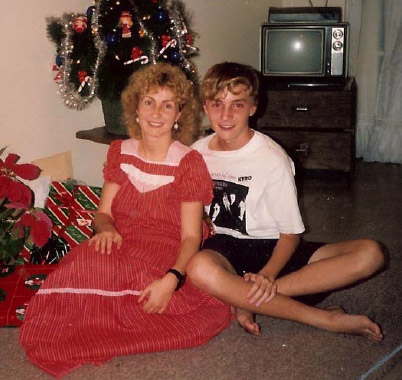 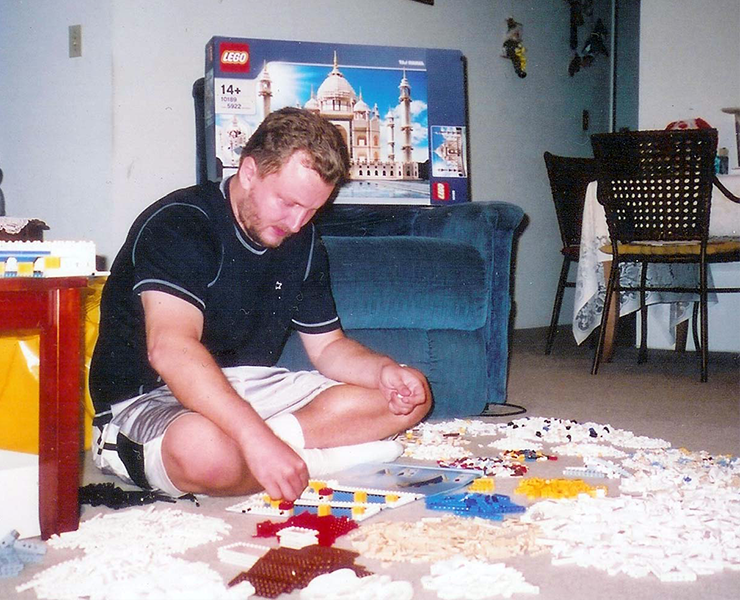 It was a hard life in Hawaii and Eliska and Dan struggled to scrape by. Although well educated in her own country, Eliska was precluded from practiing law in Hawaii. She worked a series of lesser jobs in order to support herself and Dan. Eliska was forced to uproot the household on many occasions but always took three things in tow: Dan, the computer and LEGO. On the verge of homelessness at times, the two eventually moved into a garage apartment in Kailua, Hawaii. Eliska can still remember both she and Dan scouring parking lots in search of stray lost change to help augment a meager income stream. But, they got by. Now in his teens and finally stable, young Dan was quickly becoming Americanized with a tremendous love for American sports, especially professional basketball and tennis. His love for LEGO and computers did not diminish. After graduating from Kalaheo High School in Kailua, in 1996 he pursued computer science studies at community college and the University of Hawaii. The Americanization of Dan Jezek – who was now fluent in English as well as his native Czech language – was complete in 2002 when Dan was naturalized a U.S. citizen. 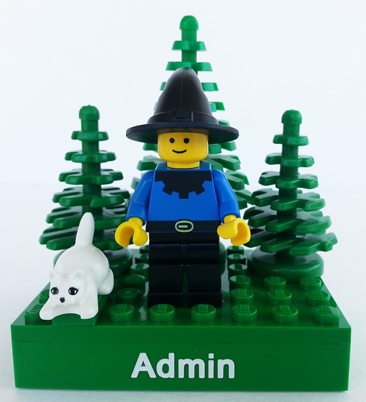 While still in a garage apartment in Kailua, Dan began work on what would become BrickLink. It started as a hobby but soon led to a full-time job administering and managing the website by himself. Until his sudden and unexpected death, Sep. 24, 2010, Dan remained the sole developer, administrator and owner of BrickLink. Thereafter, his mother — “The Jezek Family” — continued to operate it in his name until June of 2013. (Dan's father, Jaroslav, died three months after Dan.)

Dan Jezek lived a life too short, but full of accomplishment. At the time of his death he had real, concrete plans to travel, buy a home, get married, raise a family and many other dreams that remained unfulfilled due to the tragic circumstances of his passing. The legacy he left behind is called BrickLink and so long as it lives, a part of Dan will live and prosper along with it.

LEGO BrickLink (and the third parties listed below) set and use cookies and similar technologies (“cookies”) on this website to give a better and more user-friendly experience, for statistical and analytical purposes and to provide targeted and relevant marketing. You can read more about cookie categories below and use the toggles to decide which categories you wish to opt in to.

These cookies are required to enable core site functionality and are, therefore, always enabled. Includes remembering your selected country and language, tracking your movement, and usage of our site to ensure basic experience optimization. For statistical purposes, storing whether you are logged in or not, your cart, and Wanted List items. We won’t ask for your consent to place those cookies because we have a legitimate purpose for setting them.

These cookies are used to remember information that changes the way the site behaves or looks, such as remembering your last settings, background color, auto-login, etc.

These cookies (e.g. Google Analytics and Crazy Egg) are optional and allow us to track your experience on the site to optimize your browsing and shopping experience, to invite you to provide feedback, and to allow you to interact with other community members.

These cookies are used by advertising companies to serve ads that are relevant to your interests and to personalize marketing both within and beyond bricklink.com. Allows us to share information about your use of our site with our social media, advertising, and analytics partners. Those partners (e.g. Facebook and Google) may combine that information with other information that you have provided to them or they have collected from your use of their services.